I am using the title for the catchy effect it has. I don’t believe in superfood. I believe in super advertisement for a product that elevates it into a supernatural status. When will a time come that butter will be considered as superfood?

Superfoods are foods that are highly marketed for their nutritional value over other types of food. Our grandparents have been eating a lot of different foods that had no such labels and they were healthy. Why is it that we HAVE TO have superfoods in out diets to be healthy? Why should we have quinoa instead of freekeh and burghul? Why does it have to be kale and not chards or chicory? I am a firm believer of sourcing local produce. The products we have in the Levant are SOOOOOOO good we don’t really need all these trends to be imported. We have so many greens we get seasonally that can be as equally and more delicious. That’s why I have been visiting Souk El Tayeb, our farmer’s market, more regularly and getting some local forage greens, syrups, and some “trendy” foods.

The demand on superfoods skyrockets to the extent that those who grow it can’t even afford it anymore. I’M LOOKING AT YOU QUINOA!

It fills the hipster shelves, then creeps into menus leading to mainstream popularity at which hipsters would press the ABANDON button and look for the next hipster thing to adopt. Every new discovery is a superfood, it seems. Does this mean the not-so-super-food we grew up having wasn’t doing us any good? “Superfoods” should add to the cuisine, enrich it, rather than sweep ingredients out. 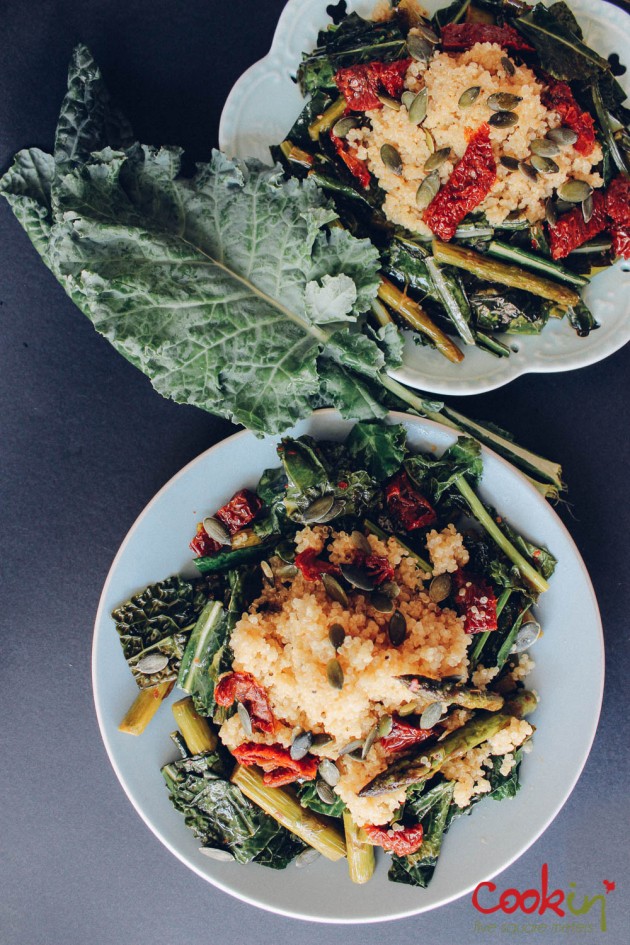 I find no harm in following trends. But the religious attachment to trendy foods only because they’re the “IT” item is ridiculous. Of course this recipe is full of “trendy” superfoods: quinoa, kale, and the local seasonal asparagus. This should get me viewers, no? Meh! It is a good recipe! Superfood or not, it is something different I cooked and enjoyed on a weekday morning at home with my little sister to use up the produce I had bought from the Saturday farmer’s market.

So, you want superfoods? A superfood salad that will make you strong, “healthy”, and trendy? Try this “superfood-charged” salad with asparagus, kale, quinoa, and sun-dried tomatoes as a side to cooked jackfruit meat, tofu steaks, melty cheesy vegan mac & cheese, or any food that is considered cool, trendy and hipster!