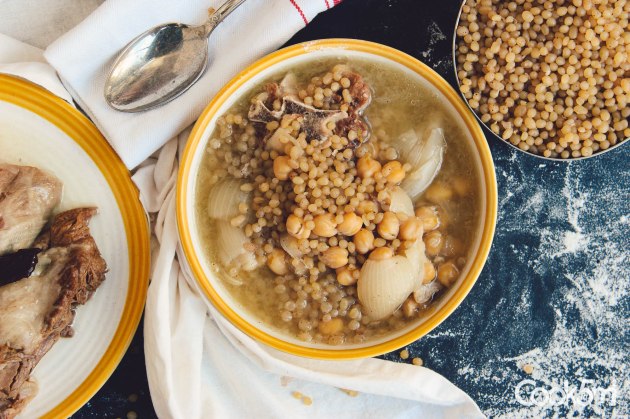 I’ve been searching for the origin of this recipe. I was asking people around me how they (or their grandparents) heard of this particular dish. My question was where did they get the recipe from and how did they make the pearls/giant couscous/maftoul (as we call it) or get them from. Almost no one could give me a satisfying answer about its origin. All they know is that they used to get the “maftoul” from the supermarket and no idea how the recipe got to them..

Up until I saw the origin of moghrabieh on Dirty Kitchen Secrets, I used to think it was a Palestinian dish. Turns out it is Moroccan. Due to its origin, this dish gained the name that was altered I guess with time and accents from maghribiyah (from Morocco) to Moghrabieh. This is how Wikipedia defines it:  “It was brought by Moroccan migrants to Palestine, where it has been modified to what’s called maftoul. Although maftoul is considered as a special type of couscous but made from different ingredients and a different shape. Maftoul is an Arabic word derived from the root “fa-ta-la” which means to roll or to twist, which is exactly describing the used method to make maftoul by hand rolling bulgur with wheat flour.” 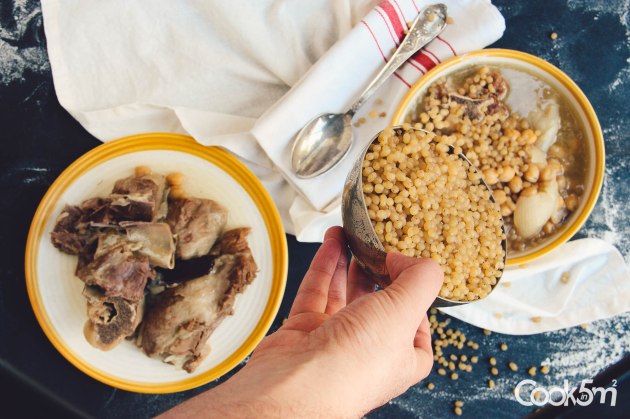 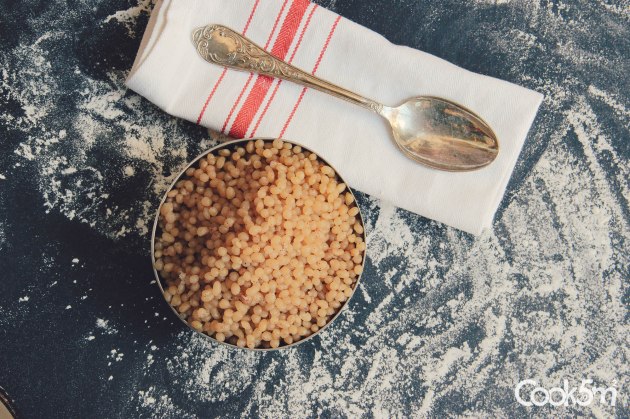 What I know, for sure, is that making maftoul is a Palestinian tradition that few know about and still do to this day. I remember the time when my grandmother used to make maftoul for the huge moghrabieh pot we cook. Mom and grandma (her mother-in-law) used to sit next to low tables with wide round shallow pots and roll the cracked wheat for hours with flour, yeast, water and oil till they get satisfactory pearls. They used to keep us busy while they work by giving us a pot with the ingredients and ask us to roll some. It was fun getting messy with our hands.

Unlike the market moghrabieh, these fresh ones are more delicious and fragrant. I would allow myself to declare that you have not tasted real moghrabieh until you have tried this particular one.

Moghrabieh is not an everyday dish in our family. Whenever there is moghrabieh, there has to be, at least, 7 persons at lunch. It takes time to prepare but the end result is a homogeneous mix of flavors declaring itself in the earthy crumbly texture of maftoul and the rich stew that bursts with essence of meat and bones caressing your palette with onions, chickpeas, and melange of fragrant spices. Yes, meat and bones. The best way to cook it (but not particularly the way I like it) is with lamb meat and bones. The fattier the meat is, the better the stew.

Not for me though.

That’s how we roll

I used to have it with chicken (back when I stopped eating meat for 2 years) but it doesn’t even come close to the original recipe.

For this special Sunday lunch, we had special guests over. Apart from my family, we had Chef Tommy, whom I met at Food Blogger Connect Lebanon and promised to share this family recipe with, my amazing friend NaNo before leaving to UAE, and Mike who’s almost part of  the family now. We had a live demonstration of how maftoul is made before digging in what Chef Tommy described as no other moghrabieh he has had before can compare to this. 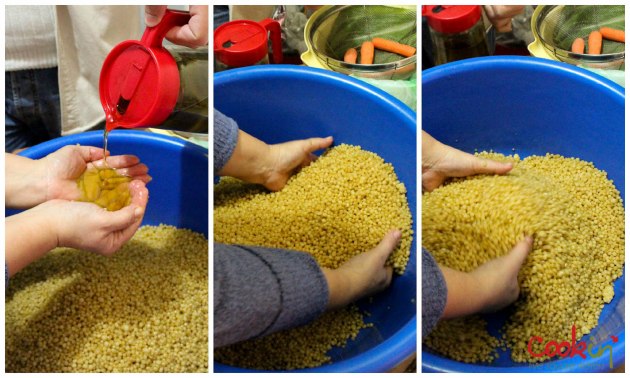 Preparing Maftoul to be steamed

Adding butter and spices to the steams maftoul

Moghrabieh (+ how to make Maftoul)

And this is how we eat it.

For serving, add a large spoon of maftoul and top with stew and enjoy.

This hearty meal is good on its own.

Do not attempt to make any starters or salad. You’ll mess things up.

Desserts are also not advisable, unless after a few hours, or maybe at night.

And check these vines made on that day:

[UPDATE]
Recently, Anthony from NoGarlicNoOnions discovered Moghrabieh as street food and in a sandwich in Tripoli (our Lebanese Tripoli that is) and now I’m curious to tasting it myself.

14 thoughts on “Moghrabieh; Tradition and Gathering”