Keeping up with my brand and my blog, I am mixing things up and posting things late.
Last week we celebrated the start of a great initiative started by two awesome ladies, Nadia and Mai. We celebrated on April 2nd, along with all the participants by hosting a gathering with my foodie friends at a local restaurant that I LOVE for its food, atmosphere, and simple feel.

Yesterday we celebrated the start of #aprilisforarabfood, an initiative to share our beautiful diverse cuisine and tell the world where hummus and shawarma come from, for example (you hear that, culture robbers?) . ☠️☣️ . We feasted on some of the delicious creations of @kahwetalfranj from this kibbeh and labneh that I licked every thing off the plate, to the cheese kaaké, and amazing salads. . 🥙🥖🥗 We had a special guest and awesome cook and author: @bethanykehdy. She blessed us with her creative creation, kishk akhdar mtabbal that got almost wiped out before the food got to the table 😂 . 🥘🌾 If you're interested in taking part in this initiative, we'll be releasing a weekly these of posts. All you have to do is use the hashtag and enrich us with your mouthwatering creations. . It was lovely catching up with these kick-ass ladies @ptitnfit @bethanykehdy @revivebyrania @healthyliciousbysara . Initiative by @sweetpillarfood and @almondandfig . . . #food #foodie #foodphotography #lebanesefoodstylist #canon #lebanesefood #levant #foodblogger #meetup #middleeast #middleeasternfood

The initiative is called April Is For Arab Food, and it is to celebrate our heritage recipes and bring exposure to it. To me, most importantly, this is so important in the west where our food is being appropriated and promoted as Israeli food. I live online and I SEE!
My friend, blogger and cookbook author, Bethany Kehdy said it best in her book and shared it on instagram. I could not have said it any better

It’s the month for the wonderful and important initiative that is #AprilisforArabfood launched last year by @almondandfig & @sweetpillarfood to celebrate & raise awareness for Arab food heritage. In the West, Arab food is veiled by the shadow of Israeli cuisine. It has created a misconception that Israeli food is a benchmark of Middle Eastern cuisine also known as Arab food. Arab food is an important cornerstone of Israeli cuisine though the latter is not a true reflection of Arab food. I’m aware that these statements, along with my #theJewelledTable intro (swipe left), have turned off & alienated some, however I find it crucial to debunk the narrative. I cannot understand why some may be sensitive to the fact that Israeli cuisine is a rich and diverse fusion cuisine in itself that brings together Jewish diaspora influences with Arab influences. Yes these are ‘Arab’ dishes. With Arabic names. These Arabic names reflect their identity as Arab dishes and establish enough authority for them to be labeled as Arab food even if they have been prepared by Arab Jews for centuries. A British Jew would not prepare Shepherd’s Pie & call it Jewish Shepherd’s Pie. We do not say this is Christian ma’amoul or Muslim Koussa Mehshi, so why say this is Jewish hummus. Was it cooked according to Sabath guidelines? Isn’t it just Kosher then. Let us not reduce the cuisine to a religious divisive power-play. We’ve all been breaking bread over the same dishes for centuries. We simply observed religious dietary guidelines whether Kosher, Halal or Siami/Ate3. I find this inclination to distinguish it as Jewish rather than Arab as internalised anti-semitism. I also find the fact that even having this conversation brings on a worrisome tiptoe is enough fuel to have it. Having this conversation is not being anti-semitic, I am semitic. This is why this initiative is so very important. It is an imperative initiative that celebrates a shared cuisine and unites the Jews, Muslims and Christians that have cooked, eaten and shared these dishes for centuries. And perhaps if we can’t agree then we can just call it Abrahamic food. Agree, disagree or add your thoughts below. 📸 @nassimarothacker

I am happy to be part of this and I will be sharing recipes and photos according to our weekly themes (late one this week) to give you a closer look at what our food is and how alive the markets are.

The first week’s theme was Mahashi; Stuffed Food. We are known for the various types of produce and we actually stuff a lot of them in one way or another.

I posted these photos in my stories and it caused a stir. A similar photo posted by @oliahercules was censored by Instagram for sensitive content. But here it is. This is where a local favorite comes from: Stuffed intestines and stomachs, and beef and lamb feet Fatteh. 🐑🐄🐏 Coming from a family of butchers, I am used to this sight. I know where food comes from. I have seen animals being slaughtered when I accompanied my dad when I was a kid. It is important to see this, I believe. 🔪 But who thought of emptying and cleaning intestines and stuffing them with the animal's meat? How sadistic! . . . #saida #lebanon #food #foodphotography #streetphotography #foodie #animal #slaughter #butcher

Away from the stuffed produce that a lot of my fellow bloggers have shared on their platforms, I’ve decided to go a bit more gore and follow-up with the behind-the-scenes photo I’ve shared from the Saida market of intestines and stomachs being primarily cleaned with running water on the floor inside a butcher shop. To which I’d like to clarify, this is the first clean-up and those are cleaned so many times before they hit the food prep. Read the recipe below to get it.

In Arabic, intestines for food use are called Fweregh (feregh for singular, Arabic for Empty), and the stomachs are named the same way we call bellies on people; Keresh (Kroush for plural). There are several parts of the Keresh used for stuffing. One looks fuzzy and the other is with a honeycomb pattern (both pictured) and one is like a wide tube and another is just thin fat film casing that traditionally used by some to wrap kebab or kafta meat fingers and cooked where the fat melts and keeps the meat moist. 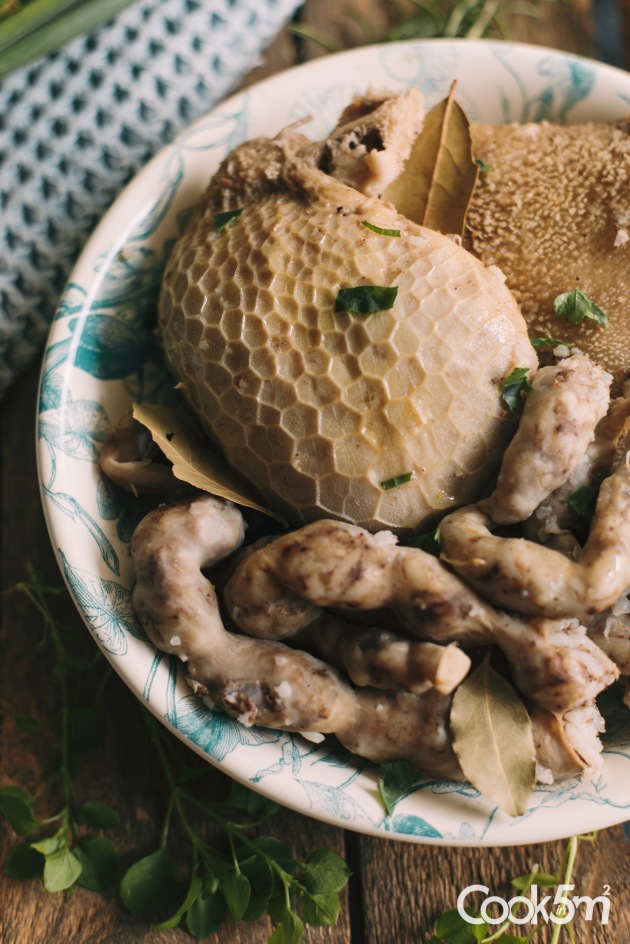 This is not a dish I eat myself, despite being exposed to this from an early age, being the son of a butcher and accompanying my dad sometimes when he’s slaughtering an animal. But I thought this is a recipe to be documented and shared for those who like it, or those who don’t know it. So vegan and vegetarian friends, I’m sorry for this!

The recipe is called Ghammé, which in Arabic can translate to a gloomy overwhelming feeling, commonly accompanying sorrow and melancholy. Don’t ask me about the origin of the name. Once I know, I’ll share it right away. But this dish is highly praised, mainly for its rarity. It is a time and effort consuming recipe, and this is why few people make it. Even when they make it, they have to know how to make it well. It is quite tricky to get it right. But here is mom’s recipe for making this glorious offal dish in the best way possible. 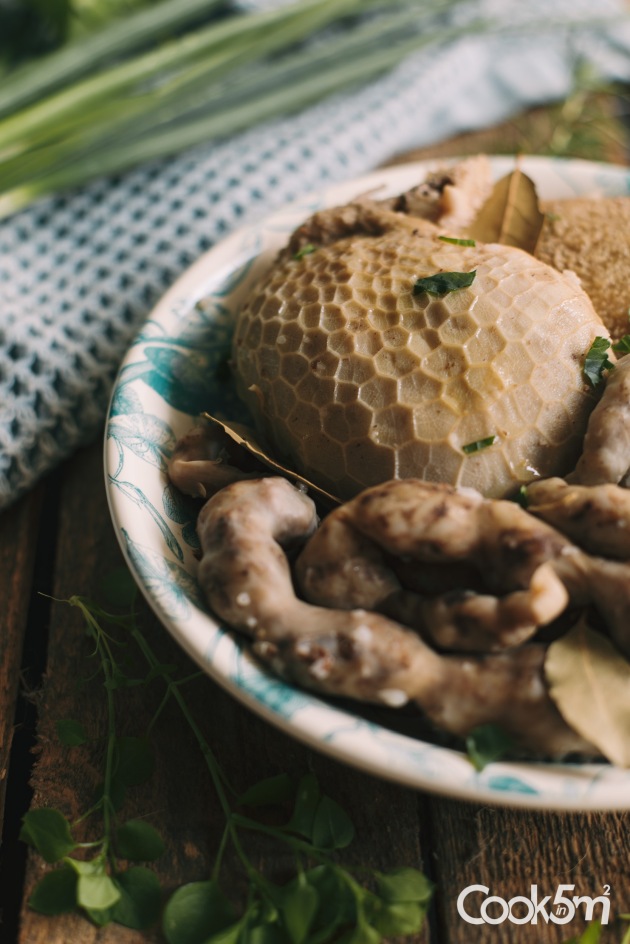 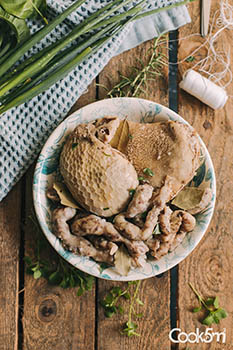