This is the third post in the Kitchen Basics Series. I started by introducing kitchen equipments one would need in the kitchen, then I listed a few ingredients that you need to have to get the cooking in your kitchen started. In this installment of posts, I’ll list a few skills and recipes that you need to learn by heart.

First thing, you need to know your knife. Get a knife. Call it your own. Get acquainted with it. It will be your friend in the kitchen and almost everything you need to prepare will require a knife at least once. You do not want fingers covered in cuts, like mine. At the beginning, when the knife I used wasn’t mine, I would get a cut (or many) on my index finger when I’d get under a little pressure.

It can be meal. On a budget. A very tight budget. Or sickness food
Get whole potatoes, either scrub them clean, or peel them. Place them in a pot full of salted water and boil until tender. Bringing the water to a boil with the potatoes in it will bring the potatoes to cook more thoroughly instead of overcooking the outer part by the time the interior is starting to cook if you drop them in boiling water.

why does food look so good in anime?

Rice pilaf is a method that involved boiling rice and water then letting the mix simmer until all the water is absorbed. This is the same way quinoa is cooked. Salt the water and flavor it, or add vegetables as it cooks to make a vegetable rice dish. It works best with long grain rice
Boiled rice works best with Basmati or Jasmine rice. The method is bringing salted water to a boil, adding a few aromatics like sage, cinnamon sticks, cardamom pods, and cloves, then dumping the washed Basmati rice and cooking it until it is soft and well cooked
Risotto is cooked using short grain rice, risotto rice, that is cooked in stock, gradually added and absorbed by the rice to be cooked. It is not my favorite thing to cook.

I am sure you are familiar with the technique: boil water, drop pasta in, wait until it’s done, drain and eat. But you have to learn a couple of notes that people miss, or don’t know what they’re doing. 1-You should always salt the boiling water. This is where you get to flavor the pasta. 2-Adding oil to avoid clumping pasta in unnecessary. Give the pasta a stir a couple of minutes after you drop it in is enough. 3-If you’re using pasta directly after boiling, dump it right into the sauce, using some pasta water to thin out the sauce. Otherwise, wash with cold water to stop the cooking process, and here is where you can add oil.
Speaking of which, I got pissed at a recipe presenter at an Arab Cooking TV station when he was teaching students on TV to cook pasta and use olive oil in pasta water. Oil would boil on the top and not in between pasta pieces to be effective in keeping them separate.
So I took it to twitter!

After a couple of tweets, he sub-tweeted me with the following:

Translation: “It is weird folks the trend of Chefanistas who know and “get philosophical” about food that are many now and they call themselves foodies and they can can’t fry an egg. Give us a break”

I retweeted it and proceeded to POACH an egg 😂

Thank you very much

Hard-boiling an egg is when the yolk has hardened. When the yolk turns grayish green, this is when you’ve boiled it too much. Honestly, this is how I used to eat eggs. I KNOW 🙈
For soft-boiled eggs, with runny yolks, bring water to a rolling boil, then lower the heat to a simmer and lower the eggs carefully into the water for 5-7 minutes. For detailed step-by-step, check this article by TheKitchn 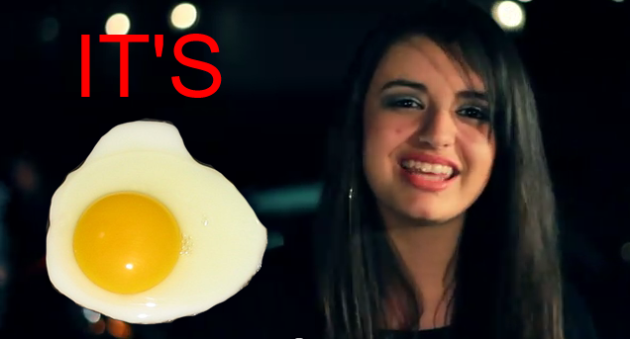 In a frying pan, heat some butter or oil, and crack an egg or two. Lower the heat and let the whites set, leaving the yolks still a bit runny. Sprinkle with salt, black pepper, and/or chili flakes. Lay the eggs on toast, a grain salad, or a bowl of noodles or fried rice

This is a tricky technique. But with some practice, you’ll be able to do it blindfolded.
In a small pot, bring water to a simmer, Add a tablespoon of white vinegar, especially when the eggs are not SUPER fresh, to help the whites hold. Once it starts to form small bubbles, crack the egg in a small bowl or ramekin. With the handle of a wooden spoon, create a whirlpool and drop the egg slowly right into the center. Keep swirling without touching the eggs for a few seconds then leave it to cook for 3 minutes until the white is a bit bouncy and the yolk is still runny. With a slotted spoon, fish it out and drain it on a paper towel. Sprinkle with salt and pepper and serve warm

Making and Kneading a Dough

One of the sexiest things! Kneading dough is such a sexy thing to look at. If you don’t agree, here’s a gif!
You need to try making a dough, whether it is for a homemade pizza, or for a whole loaf of bread, you need to try it at least once. Have friends over, or a date if you’re that confident 😏

This is a base for many recipes with creamy sauces. It starts with a Roux, which is a butter and flour mixture. When this is added to a liquid mixture and brought to a boil, the liquid will thicken into a silky sauce. Think, gravy, macaroni and cheese, creamy casseroles, or cheesy dips.

A basic spaghetti sauce for a quick meal, cook some gnocchi in it, or serve it next to mozzarella sticks or chips. Very versatile sauce. Learn the basic method and then play around with it. The basic sauce is olive oil, garlic, chili flakes, and tomatoes. Season with some salt and you’ve got a meal! Learn the full recipe here

This is a given in most Lebanese sweets. It is basically a sweet syrup, sometimes flavored with aromatic herbs or flowers, and drizzled on the sweets or used to dunk the fried dumplings or sweets in. It is a ratio of 1 cup water to 1.5 to 2 cups of sugar, stirred until dissolved, then left with the herb to steep, cooled, strained and stored. It can store for long time in the fridge. Use it to top sweets or in cocktails. 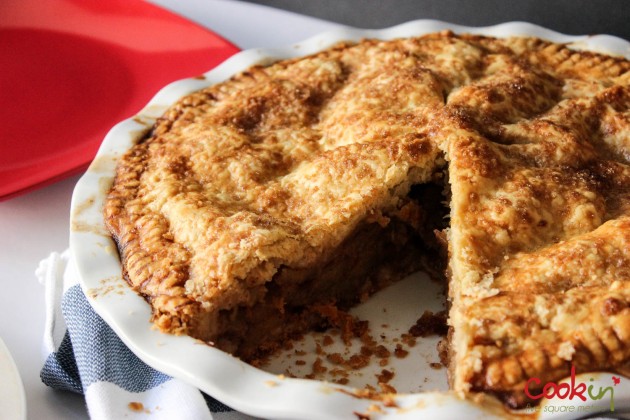 A very versatile dough to use in baking sweet recipes like pies, or in savory like quiche.
I couldn’t have put it better than the way it is described in this post: How to Make a Pie Crust – A GUIDE BY MELISSA CLARK

Either by hand, or with an electric whisk. I’ve done it many times. It takes a lot of time and it depends on the quantity. Last time I whipped cream, it was 2 liters in a large bowl. HAND WHISKED. I looked funny doing it as I reached a stage when I had a blank stare on my face while my arm moved up and down, right and left over that bowl. Whipped cream is so easy to make. Open the box of whipping cream and … you guessed it. WHIP! You need to get soft peaks which is when the cream takes a mountain shape when whipped but it is still soft. If you whip more, you’ll reach the hard peak stage, it is when the cream feels harder. If you keep whipping, the fat in the cream will separate and you would have made fresh butter. Congrats! Drain it well, wash, dry, and add some salt and spread on bread! I would envy you
P.S. You will never see me buy those compressed cans of “whipped cream” unless we’re having a sexy game 😏, or it is the end of the world 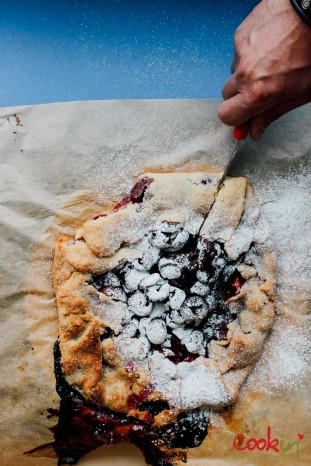 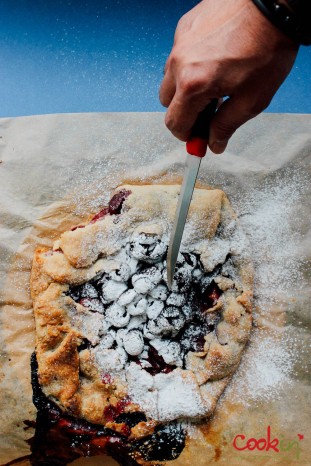 Speaking of dough, pie crust, and cream, I chose a recipe for this cherry plum galette because it is simple, fun, and you can ask for guests’ help in pitting the cherries to buy yourself some time as you prepare dinner. That is what I did. My friend Omar was the first comer and he was the once bringing cherries. So he and mom started pitting the cherries. I baked the two galettes during the dinner and but the guests, and I, only had one. The second was was devoured by Elie, not all of it, the next day after he saw my friend Emil’s post on Facebook which got a lot of attention. Make it yourself now! 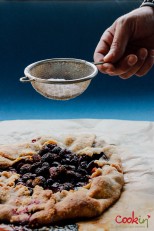 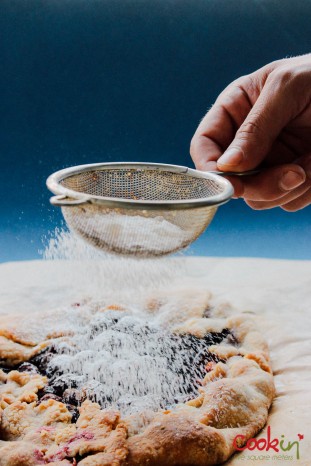 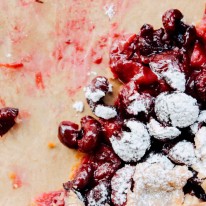